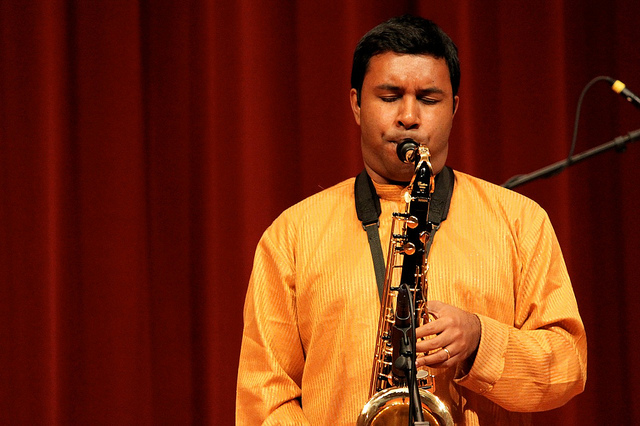 Prasant Radhakrishnan is a versatile saxophonist steeped in both South Indian Classical (Carnatic) and jazz disciplines. The unique vocal texture of his sound on saxophone, noted for its expressive complexity and rhythmic ingenuity, reflects Prasant’s continued study of tradition, constant innovation, and vast concert experience over the past 23 years.

The foremost disciple of Carnatic saxophone pioneer, “Padmashri” Dr. Kadri Gopalnath, Prasant began developing his music over the course of nearly a decade of intensive musical training under his guru, much of which took place in the traditional gurukulam format of complete immersion. Waking at 5am each morning in his teacher’s home and practicing through the day under his guidance, Radhakrishnan was initiated into the world of Carnatic music in a format seldom available today in India, much less in his native Arizona.  The rigor of this training, followed by the privilege of accompanying his teacher on stage in hundreds of concerts in subsequent years, fostered a deep understanding of Carnatic music. 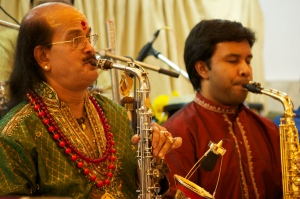 Kadri sir and Prasant performing together in 2011

In his solo Carnatic endeavors during those years, he has had the privilege of performing with luminaries such as M.S. Anantharaman, Guruvayur Dorai, Mannargudi Easwaran, Srimushnam Raja Rao, Poovalur Srinivasan, V. Suresh, B. Rajashekar, as well as superstars of the younger generation such as B.U. Ganeshprasad, P. Satishkumar, Embar S. Kannan and Delhi P. Sunderrajan, among others. At age 17, Prasant released his first album, Swara Sudha (2000), featuring some of the most respected names in Carnatic music.

Back home, in parallel with his meteoric development as Carnatic artist, Radhakrishnan immersed himself in American jazz, playing in the all-star bands in high school and going on to study jazz at the University of Southern California (2000-2004). It was in this intense musical environment that Radhakrishnan first began to hear a new sound, one that naturally combines Carnatic and jazz music.

Prasant’s musical trajectory reveals his deep musical curiosity and constant evolution within the Carnatic tradition. After he completed his Bachelor’s Degree at University of Southern California in 2004, Prasant received the prestigious American Indian of Indian Studies Senior Performing Arts fellowship which funded a year of intense music study, research and performance in Chennai, India culminating in the creation of his second critically acclaimed album, Duality (2005). This recording displayed the subtle technical innovations he developed on the saxophone to render Carnatic music.  Prasant has since released two additional Carnatic albums, East Facing (2007), which continued his effort of vocalizing the saxophone and Kiravani: A Live Experience (2010) which is a 2-CD live recording featuring an extensive one hour piece in the raga Kiravani.

After Prasant’s move to the Bay Area in 2005, he founded VidyA. VidyA has emerged with a soulful, penetrating sound that pushes the labels of “fusion” or “world music” by merging the virtuosity of jazz with the melodic and rhythmic nuance of Carnatic music. In VidyA’s music, Prasant’s multi-layered compositions infuse the classic jazz sounds of bass, drums, and saxophone with unusual melodic richness. Named among the top jazz acts by the San Francisco Chronicle, VidyA’s seamless hybridity forges new ground in the American jazz scene and serves as a liaison between the worlds of jazz and Indian classical music. It is a style that is heralded as “..madly percussive and sparkling with…a saxophone that switches idioms from second to second, and a warm, quickly picked string bass. The result combines jazz’s sweet dreaminess with the Indian form’s insistent rhythmic and tonal changes…” (San Francisco Weekly). VidyA (2008) is the debut album of his critically acclaimed Carnatic-Jazz trio.

Since then, Radhakrishnan has established himself as an exciting Bay Area artist known for blurring musical boundaries while steeped in traditional roots.  His six year relationship with San Francisco art space, Red Poppy Art House, has resulted in two artist residencies in 2007 and 2010 and groundbreaking musical collaborations such as Nefasha Ayer: The Space of In Between (with Ethiopian vocalist Meklit Hadero, guitarist and painter Todd Brown, jazz artists Marcus Shelby, Howard Wiley and poet Michael Warr among others) and Teobi’s Dream (a multi disciplinary project with Todd Brown at the de Young Museum).

In 2009, Prasant was commissioned by the de Young Museum Cultural Encounters Initiative and Intersection for the Arts to create and perform original work based on a piece of art in the museum, resulting the VidyA composition “Turbulence, Transcendence.” De Young called upon him again in 2010 to perform an original concert commemorating the King Tut Exhibit combining Carnatic, jazz and Middle Eastern musics, in which he worked with Moroccan master musician Rachid Halihal.

In 2010, Radhakrishnan was awarded a Zellerbach grant for the creation of new compositions performed by VidyA in 2011 and will be included in VidyA’s anticipated second album, already recorded. He has also collaborated with a variety of Bay Area artists in various fields, such as Indian classical dance artists Natya, Charlotte Moraga and Rina Mehta. In a 2010 artist residency with Oakland Asian Cultural Center (OACC) Radhakrishnan and Mehta created original work combining Kathak dance with Carnatic, Hindustani and jazz musical traditions culminating in a grand collaborative performance there in May 2010. He has since received grants from National Endowment for the Arts (NEA), Sparkplug Foundation and SF Friends of Chamber Music for his original work.

Prasant’s exceptional approach to his music and instrument has been witnessed in a diverse range of venues and locations around the world: from concert halls in India and jazz venues in Japan, to concerts, cultural festivals, and lecture demonstrations all over North America. Prasant has also lectured in several universities in the U.S., including U.C. Berkeley, UNC Chapel Hill, University of Chicago, and Wellesley among others.

“Prasant is redefining the way to play saxophone, and the way for us to listen to it.” (San Francisco Chronicle).